Few things are more embarrassing to a homemaker than unpleasant odors in the house. A foul-smelling garbage disposal or ripe garbage pail can make even the loveliest of homes uninviting.

Unpleasant odors often are associated with poor housekeeping. While this sometimes is the case, foul odors can invade even the tidiest of homes. Bacteria is a prime source of most household odors. Decomposing food, pet feces and dampness caused by poor ventilation are producers of odor-causing bacteria.

Ironically, most unpleasant odors can be eliminated using a few common household products. Baking soda, vinegar, lemon juice, rubbing alcohol and cat litter can do more to freshen the air than a battery of caustic cleaning products.

One fundamental element in preventing unpleasant odors from returning is to eliminate the source. Be careful about what you throw into the garbage pail. Empty food cans should be thoroughly rinsed before they are tossed into the trash. Fruit and vegetable peels should be fully ground in the garbage disposal or placed in a compost pile. Never put wet garbage into household trash.

Another effective means of keeping a house smelling fresh is to have lots of ventilation – fresh air. It isn’t enough to open a window now and then. Open closet doors and dresser drawers regularly. Never place damp clothing into a closet or dresser drawer.

Aside from its primary use for our feline friends, cat litter is an especially effective odor-dispeller throughout the house. Its clay composition gives it magnet-like properties when it comes to absorbing foul odors.

Freshen a musty trunk by pouring cat litter into a large, uncovered coffee can. Place the can into the trunk and close the trunk lid. In most cases, the odor will be gone overnight.

Cat litter also can eliminate odors in garbage cans. Simply sprinkle a couple of inches of cat litter into the bottom of the can. Replenish the cat litter each time the can is dumped.

And, believe it or not, cat litter acts as an excellent absorbent for foul odors in the refrigerator. But, if cat litter next to food bothers you, substitute baking soda.

Place a small dish or bowl filled with baking soda on one of the refrigerator shelves. It works just as well in the freezer. Baking soda has lots of other odor-eliminating applications. You can remove odors and spills inside the refrigerator or freezer using a cloth dipped in a solution of two tablespoons of baking soda in one quart of warm water, and then wrung out.

Get Rid of Drain Odor

Baking soda in combination with table salt, vinegar and boiling water acts as an environmentally friendly drain cleaner/odor eliminator. Pour one cup of table salt, one cup of baking soda, one cup of white vinegar along with two quarts or boiling water into a drain. We suggest that you do this at bedtime in order to allow the solution to remain in the P-trap and drain overnight. Perform this routine about once a month for clog-free, fresh-smelling drains.

Freshen a smelly garbage disposal by grinding sections of oranges, lemons or grapefruit while flushing the unit with warm water. Another safe method of cleaning the garbage disposal is the use of ice cubes made of vinegar and water. Pour one cup of vinegar into an empty ice cube tray. Fill the balance of the tray with water, and freeze. Grind the vinegar cubes in the disposal. The vinegar acts as a cleaning agent while the ice sharpens the blades.

One of the least pleasant and most difficult household odors to remedy comes from pet urine. Urine has a tendency to permeate an entire home. Urine-soaked carpets should be professionally cleaned. Severe cases might require carpet and pad replacement.

Concrete or wood flooring below the carpet and pad should be sterilized with a solution of one cup of bleach in one gallon of hot water.

If the odor persists, the area should be sealed with a coat or two of shellac. White vinegar works especially well on concrete that has been tainted by urine. Scrub the area with a solution consisting of half white vinegar and half warm water. Or, put undiluted denatured alcohol in a spray bottle and spray the floor thoroughly.

Get Rid of Cooking Odors

White vinegar also can be used to get rid of strong cooking odors. Place a pan of white vinegar on the stove and let it simmer.

Nothing can sour a good novel more than the musty smell that frequently emanates from old classics. To rid books of this odor, store them in a paper bag filled with crumpled newspaper. The newspaper will absorb the smell. Repeat this process several times using fresh newspaper each time. 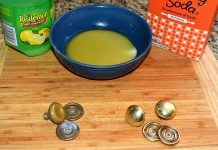 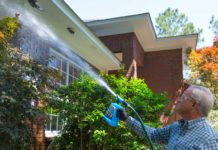 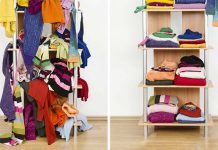 How to Declutter Your Home in Record Time 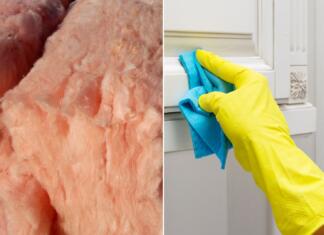 This week, hear our special technique to degrease kitchen cabinets, plus our thoughts on mixing and matching insulation.