Acoustic ceiling tiles are a simple and inexpensive way to dress up virtually any room in the home. They come in assorted sizes and styles and can be installed in various ways.

Although acoustic tiles can reduce noise in a room, they most often are used to cover an unsightly ceiling. They generally are available in 12-inch squares constructed of compressed mineral and wood fibers. Some leading manufacturers produce tile with decorative finishes.

Acoustic ceiling tiles differ from acoustic panels used in a suspended ceiling system. The latter is similar in appearance to a tile except as follows: Acoustic panels typically measure either 2 foot square or 2 feet by 4 feet. Further, they are installed into a grid system that is suspended from the ceiling with metal wire.

Due to its commercial appearance, the suspended ceiling system is not widely used in residences. However, it is an excellent alternative when lowering the height of a high ceiling or as a means of concealing exposed plumbing, electrical or mechanical systems.

Acoustic ceiling tiles are installed in one of two ways: glued directly to a wallboard or plaster ceiling or attached to wood furring strips with staples. Using adhesive is the least complicated and quickest method of installing the tiles. The wood furring strips are a must when the existing ceiling is sagging, wavy or highly deteriorated.

Wood furring strips are run on 12-inch centers perpendicular to the ceiling joist. They are attached with drywall screws long enough to penetrate the strip and the plaster or wallboard. The screws should have at least another three-quarters of an inch leftover to go into the framing.

Over time acoustic tile ceilings can yellow or become stained due to a leaky roof. Stains can be sealed by spot priming using a shellac primer-sealer. The stain sealer can be applied with a brush, roller or via an aerosol spray can.

One of the more effective ways to brighten a dingy ceiling is to periodically vacuum it, using an upholstery attachment. If frequent cleanings don’t produce the desired result, try a coat of thinned-down latex paint. Be sure to thin the paint to make it less likely to fill the holes in the tiles. Some tiles can’t be restored and must be replaced. The process is simple. Remove the damaged tile by using a utility knife to cut around the entire perimeter of the tile. Pry out the remains of the tile and staples with a putty knife. Use the putty knife to scrape off any old adhesive from the ceiling or furring strips.

Next, cut off the tongue from one edge of the new replacement tile. This will allow the tile to easily be installed without the removal of the surrounding tile. Finish the job by applying a generous dab of adhesive to each corner of the backside of the tile. Place the tile into position and hold it into place for several minutes until the adhesive sets up. 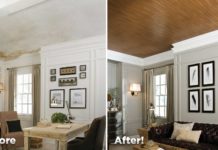 How to Cover a Popcorn Ceiling with Planks

How to Repair a Hole in a Textured Popcorn Ceiling

How to Install Paneling on a Textured Popcorn Ceiling 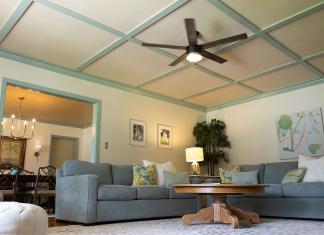 Running out of places to decorate? Look up — this DIY grid takes your ceiling from drab to fab! Watch our how-to video learn how to make it.

Is a Motion Sensor Ceiling Light Really Worth It? | Ep....