We’re grading the lot and preparing for the driveway on the outside of the Kuppersmith Project house renovation. Meanwhile, inside the house, we’re focused on installing the granite and quartz countertops in the kitchen and master bath.

Projects featured in this episode include:

Landscape designer Paul Fontenot, of Garden Design Solutions Incorporated, was given the task of coming up with a landscaping plan for the yard around the Kuppersmith Project house.

His approach on the landscaping plan for the yard included flowering deciduous and evergreen trees and shrubs in the front yard to accent the house without overwhelming it.

In the back of the home, a paver patio for outdoor entertaining will fill the space between the house and garage. The remainder of the backyard will consist of an open lawn, with river birch trees and shrubs growing along the fence.

In addition to the landscaping layout, separate plans were drawn for the irrigation system and outdoor lighting.

Before the landscaping plan can be implemented, the lot had to be graded so rainwater will drain properly. A tractor was used to grade the lot to the proper slope and fill in any low spots.

To accommodate the paver patio between the garage and house in the backyard, 7” to 8” of dirt had to be removed. This will be filled with 4” of base material, covered by 1” of sand, topped by 2” to 3” thick pavers.

Forms were laid out for the poured concrete driveway in the front yard. The forms also included space for a border of the same pavers that were used on the patio. Rather than cementing the pavers to the driveway, locking sand will be used to hold them in place.

A Generac whole house standby generator was installed behind the garage to provide emergency power to the home in the event of a power outage.

The generator runs on natural gas and is connected to the electrical system of the home with an automatic transfer switch, allowing the generator to start and switch over automatically when the lights go out.

Since the Kuppersmith Project house is located on the Gulf Coast, a backup generator will provide security and peace of mind during hurricane season.

Once the Merillat kitchen cabinets with brushed nickel hardware were in place, it was time to install the DeNova countertops. Granite countertops with a Golden Hill color were used for the island, drop zone, and coffee bar in the kitchen, as well as the vanity tops in the master bathroom.

Since granite is brittle and can break until attached to the cabinets, care had to be taken when carrying and installing the heavy granite slabs in the house. Seams in the countertops were carefully aligned and glued together during installation.

To provide contrast and give added design interest to the kitchen, DeNova Tuscan Grey quartz countertops were used on the cabinets flanking the stove. 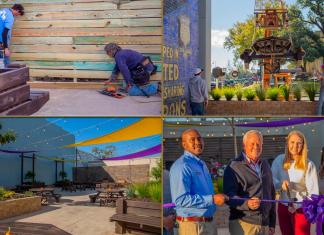