As coxswain of the eight-man boat, Chris (in white shirt) sits in the stern and steers and keeps the rowers on pace by shouting instructions into a microphone.

I admit that until very recently I knew little about crew—the sport of rowing—even though it has been practiced for many centuries. However, all that changed a couple of months ago when our son, Christopher, joined the Salisbury School crew team.

The school has six boats and a rich history of rowing. Chris was appointed coxswain of the first novice boat, which is quite an honor for a freshman, especially considering Chris had never even seen a crew race before joining the team. 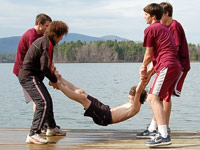 Chris’ boat is a sleek, sliver of a vessel, measuring just 23” wide and more than 50’ long. The team consists of eight rowers (each with one oar) and a coxswain. The coxswain sits in the stern and has two primary responsibilities: to maintain the rowers’ pace (strokes per minute), and to steer the boat.

Sounds simple enough, until you see the team in action. To propel the boat through the water for 1,500 meters (nearly one mile) requires stamina, concentration, brute strength, unparalleled teamwork, and the precision of a fine Swiss watch. 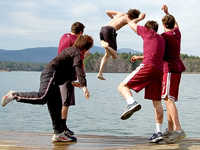 It has been thrilling to stand on the shore and cheer as the boats fly across the water. The Salisbury boats have done very well this season. Chris’ boat won a few races, and came in second in the New England Championships. We’re proud of Chris’ hard work and dedication to the team, and very grateful to the tireless effort of the Salisbury coaches.

One of the many traditions of the sport is that the coxswain of the winning boat gets tossed into the lake by his teammates. And even though the water was 40 degrees the day Chris’ boat won its first race, Chris couldn’t have been happier, nor I any prouder. 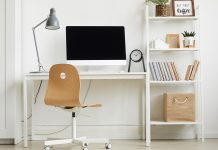 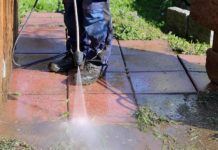 More People Are Renting Equipment to Improve Their Homes 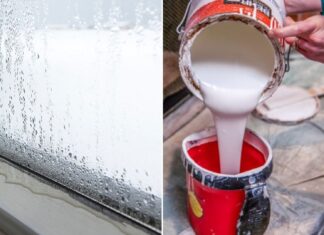