When remodeling a bathroom to make it wheelchair accessible:

Danny Lipford: Of course, the bathroom is something that’s always a challenge for people to figure out exactly the accessibility there. But seems a bit unusual that this opens to the living area instead of maybe the hallway, but that would be pretty tight in there, wouldn’t it?

Josh Shedeck: Danny, I’m glad you brought that up. Originally the house had a door. And it was a 2’ 0” door entering the bathroom right here.

Josh Shedeck: And structurally, it would have been a little bit more because we have ceiling joists and rafters that come into this wall, sitting right on this middle wall. And the other thing was by adding the door here and making it a 3’0”, it’s a lot more easier for her to get in and out of the shower. It’s a straight shot. You’re able to move around. And this is also cost efficient for us. We were able to get the shower in here, move the wall a little bit and get the toilet positioned over so that the shower would work. And that’s a key point when you’re trying to make a handicap accessible shower or tub unit.

Danny Lipford: Absolutely. Boy, you went all out there in order to lower that down. Because a lot of times you’ll have a pretty significant curb there. And the sink works out well. You have accessibility under there. And still, instead of the large handicap type sink, which can really be expensive, using a traditional sink, but just positioned in a certain way. 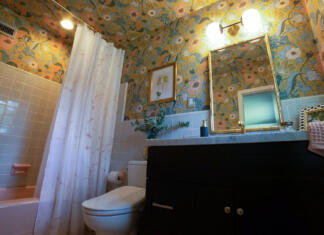 How a Bidet Cleans You and Protects the Environment

The Best Pre-Mixed Grout for Your Interior Projects