Stay cool, and enjoy the bounty of your work this growing season! 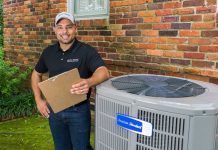 What You Should Know About Heated Floors