I have a problem in my house where the drywall separates from the ceiling and opens up a gap of 1/4″ in the winter. In early spring the gap closes completely and stays that way until late fall. The drywall tape comes loose from the wall and the gap is most significant on the walls towards the interior of the home. There is negligible or no separation of the tape along the walls around the perimeter. Also, the problem is severe on the second floor while it is non-existent on the 1st floor. At first I thought it had something to do with settling as I had noticed considerable settling of the soil outside.

A specialist firm inspected my home and told me that the foundation slab in the basement was in perfect condition and settlement was not a factor. I have had many contractors come to look at the problem and received two standard responses. One is that the workmanship of the original builder was poor and poor quality tape was used. The other answer I get is that this is related to humidity. During the winter the air inside the house is dry and it causes the wood in the joists to buckle. But most of them are perplexed that this happens only upstairs and not downstairs. They also seem surprised that the gap is as wide as 1/4″. Do you know what is going on? More importantly, do you know how I can fix it?

What you describe is a “classic” case of seasonal expansion and contraction. The problem stems from excessive dampness due to poor attic ventilation and/or a poorly insulated attic. The moisture content of the framing members (rafters and ceiling joist) in the attic (above the second floor) increases during the “damp” season and, thus, expand. This expansion causes the roof/ceiling framing to “pull away” from the wall framing resulting in the gap between your walls and ceilings. The problem will disappear when the weather warms and the framing dries out.The reason that it is occurring on the second floor and not on the ground floor is the fact that the attic area is subject to moisture and condensation more readily than the area between floors. Moreover, the condition is manifesting itself at the interior walls rather than the perimeter for a couple of reasons; attic ventilation is usually most prevalent at the perimeter which would prevent condensation and, hence, expansion. Another possible reason is that interior walls are usually not insulated. The heat in your home is, therefore, allowed to escape through the walls into the cool attic. Consequently, condensation occurs at the ceiling joist causing them to expand.

You can solve the problem by taking the following steps:

Keep in mind that you will only “minimize” expansion by taking these steps. Some cracking at the wall to ceiling connection may continue to occur. You can further prevent cracking by making sure the ceiling joist are securely anchored to the top of the wall framing with nails, screws or L-brackets.

Do Radiant Foil Barriers in an Attic Save Energy? 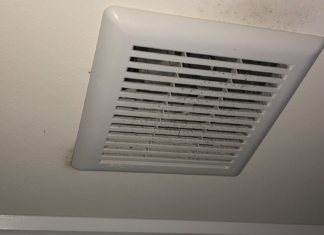 How to Keep Moisture out of the Attic and Prevent Mold...

Have you noticed mold around vents? Here's how to keep moisture out of your attic and prevent the growth of mold.

How to Easily Insulate An Attic