To keep various sizes of wrenches organized for easy access, clip the closed end of the wrenches on an aluminum carabiner, then hang the carabiner in your shop or on a belt loop.

VIDEO TRANSCRIPT
Joe Truini: Whenever I’m working with wrenches, I like to take the wrench they need to the job, rather than bring out the whole tool kit. But the problem is you start with one wrench, and of course then you need another size, and then another size. And occasionally you’ll need an adjustable wrench. Next thing you know, you’ve got a pocketful of wrenches.

So I thought a good way to organize these would be to use a carabiner. This is an inexpensive aluminum carabiner. You can find them almost anywhere for about two bucks. And because these are combination wrenches, they have a box end on one end, and you can just hook them right on to the carabiner. Even an adjustable wrench, as long as this has a hole on the end, you just hook it right on.

Now you’ve got all your wrenches together in one place, you throw them in a toolbox. When you need them, you just pull them out. They all come out together. You can also clip it on your belt loop, so. And the other great thing is even if you only need one wrench, you can sometimes use it without even taking it off the carabiner.

In fact, I like this idea so much, I use it to organize the rest of my wrenches. Take a look at this. There you go, all organized, ready for work. 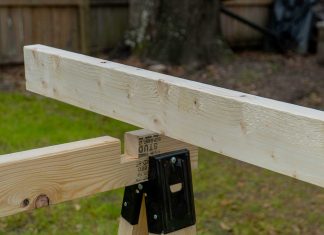 How to Prevent Plywood from Sagging on Sawhorses

Have you ever noticed that, when you try to cut a sheet of plywood between two sawhorses, it sags in the middle? If so, here's a solution!

Finally! A DIY-Friendly Way to Paint a Door Like a Pro

Foam Pipe Insulation: The Secret to Preventing Lost Laundry Between Your...