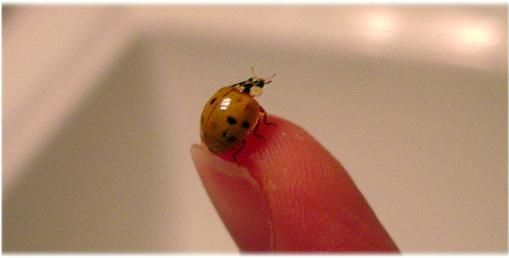 The occasional ladybug is nothing to worry about.

I am having a serious problem with ladybugs inside my log cabin. Do you have any ideas for ridding my new home of these beautiful but pesky insects? -Susan

Most complaints of ladybug infestations are caused by the Asian lady beetle, which was introduced into many regions of the U.S. as a natural control for soft-bodied, crop-destroying insects. These beetles would normally hibernate for the winter inside of caves and rocky crevices. However, in developed areas they have the pesky tendency to overwinter inside our homes!

Some fast facts about lady beetles:

Most homeowners don’t mind a ladybug or two – they’re pretty, and also pretty harmless. For those with significant beetle populations, the battle against ladybug infestation is a yearly chore that doesn’t have a satisfying solution.

Because they are so beneficial in the garden, it is generally not recommended to kill them in large numbers, yet the indoor infestations can be pretty overwhelming.

Prevention is the best strategy, along with regular removal of current invaders.

Tips for dealing with a ladybug infestation: