I’ve always been told to put a layer of gravel in the bottom of a flower pot before planting. Is this really necessary?

Actually, it’s a myth, but it’s one that even I believed for many years. The common belief is that a layer of gravel in the bottom of pots will improve drainage and keep the soil from spilling out, and besides, that’s how we’ve always done it, so it must be right.

Here are the facts about using gravel in potted plants.

The gravel myth is based on a mistaken idea that it will increase drainage. Follow my logic here and see if we can debunk this idea:

Gravel vs. Soil: Gravel does drain water – obviously, water runs through gravel faster than soil. However, the opposite is also true: soil holds water better than gravel. 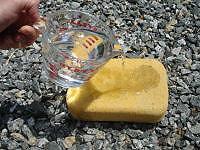 Soil Acts Like a Sponge: Water won’t run out into the gravel, or out of the pot, or anywhere, until the soil is saturated. If you don’t believe me, try laying a sponge on top of a pile of gravel, then pour water into the sponge. Does the gravel make the sponge drain faster? No, the sponge fills up, and it won’t drip until it can’t hold another drop.

Not Enough Soil: Just like with a sponge, water naturally settles toward the bottom of the soil. But because you’ve partially filled your pot with gravel, that soggy soil bottom is now higher (and closer to your plant’s roots). Basically it’s like having a smaller pot!

Poor Results: So, you end up with an unhappy, crowded plant sitting in too wet soil, and you’ve wasted valuable pot space with gravel that’s doing no good.

Your plants will be happier if you uniformly increase the drainage of the soil itself. Choose high-quality potting soil that is well draining. And if your plants need even more drainage, instead of putting gravel in the bottom of your pot, try mixing in perlite, PermaTill, or organic matter into your potting soil to increase drainage throughout the pot.

If you’re worried about soil washing out of the bottom of your pot, put a paper coffee filter, a piece of screen, or a shard of pottery over the holes before adding dirt. Usually, though, drainage holes are small enough that this isn’t a problem.

How to Use Gravel with Potted Plants

If you want to put gravel to work with your potted plants, use it outside the pot. Put a layer of gravel in your plant’s drainage tray, or down inside a decorative planter, then sit your plant pot on top. The gravel will hold water and increase humidity, while keeping your plant’s roots up out of the puddle.

Gravel comes in handy when sitting a plant inside a decorative planter.

The best type of flower pot has drainage holes in the bottom, and you should always shop for pots that drain. But for pots that don’t have holes, some people put gravel in the bottom of the pot, to create a sort of internal “drainage tray” to collect water under the dirt. Some people are able to get this to work, but it can cause problems, including:

Overwatering: You can’t see the gravel, so how do you know how much water is down there? If water builds up, the soil will turn into a soggy mess, and your plant will be on the fast track to root rot.

Disease: If you’ve ever opened a container that’s been in your refrigerator too long, you’ve learned firsthand what happens when moisture and organic material are trapped in a space with no air flow. A moldy mess! 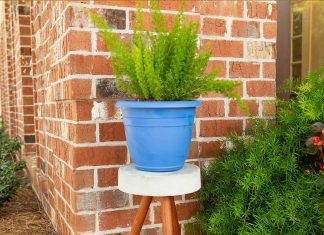 Sometimes, enhancing a blank entry just means dressing it up! Here's how to make a front porch look welcoming with a DIY plant stand.

How to Make an Easy Fall Window Box

How To Grow Basil

How to Make a Light Post Planter for Your Yard